Kl.17.10: Presentation of NORWACs work in Palestine, and about COVID-19 respons in Gaza.

Kl.17.20: Stop the anexation of the West-bank – Appeal from the Palestinacommittee of Norway

Kl.17.45: Nakba in Norwegian: From Kanafani to Kanazi, from Tuqan to Tatour Translated by Vibeke Harper

18.15: INTIFADASONGS and conversation with musicians Mohammed Alhabbash and Rima Alhabbash in Gaza Curated by It´s hard to be an Arab

18.30: Co-reading and conversation The poet Mohammed Moussa (Gaza) reads his own poems in the original language, actor Benjamin Lønne Røsler reads them in Norwegian. Translated by Vibeke Harper.

The reading is followed by a conversation with Mohammed Moussa, who also runs Gaza Poets Society.

19.15: Return To Palestine Theatreperformance by The Freedom Theatre

19.50: CORONA DIARY FROM PALESTINE by Vibeke Harper Reading of excerpts 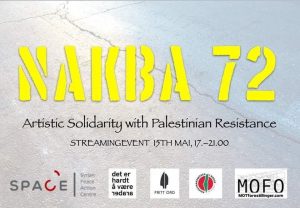