German watchmaker Glashütte Original, co-partner of the 66th Berlinale, and Perspektive Deutsches Kino awarded the “Made in Germany – Perspektive Fellowship” for the fifth time to a young German filmmaker at the section’s opening this evening.

The EUR 15,000 fellowship for the development of a screenplay is funded by this watch manufacturer from Saxony. Winner Janna Ji Wonders will now also be accompanied by a mentor when she continues working on her project. Annekatrin Hendel, Jan Speckenbach, Sandra Kaudelka and Sebastian Mez (ex aequo), as well as Oskar Sulowski were the previous winners of this generous screenplay fellowship.

Jury members Sandra Hüller (actress), Ingo Haeb (screenwriter and director) and Martin Heisler (producer) selected the treatment Walchensee Forever by Janna Ji Wonders (co-author Nico Woche) from the projects submitted. Eligible for the fellowship were directors who had presented a film in last year’s Perspektive Deutsches Kino. In addition to the “Made in Germany – Perspektive Fellowship” cash prize, the winner received a trophy, manufactured at Glashütte Original’s watchmaking school.

Section head Linda Söffker opened the ceremony and invited the members of the jury on stage. Sandra Hüller read the jury statement and the jury presented the trophy to Janna Ji Wonders, who was overjoyed to have won. Following the award ceremony, a screening of Aline Fischer’s Meteorstraße (Meteor Street) kicked off this year’s Perspektive Deutsches Kino section.

Tomorrow morning (Saturday, February 13, 2016) at 11 am, we cordially invite the press to talk with the winner about her new project in the Glashütte Original Lounge, on the 24th floor of the Kollhoff Tower.

Statement of the jury:

“In the treatment Walchensee Forever Janna Ji Wonders takes a loving, wise and close look at her own family history. And although the author is the daughter and granddaughter of the female protagonists, she does not get lost in the material.

For us as the jury, this work exemplifies the desire to explore one’s family’s past even though such a process can be quite painful – it’s a bold project that will take the audience on an intimate journey.

“Café am Walchensee” plays a pivotal role in the universal search for meaning. A place that is home but also the promise of faraway lands and utopias, since people from all over the world come to visit and bring their diverse life models with them. There are, for instance, the two sisters who in their continual quest for meaning set out on adventures from “Café am Walchensee”. From San Francisco of the flower power era and cave dwellings on a Greek island to the well-known “harem” of a German commune, the film spans an arc between these many different worlds and lifestyles that have informed the lives of the protagonists.

In light of their difficulties, opportunities and courage, we oscillated as we read between pity and envy – an emotional journey that we found extremely fascinating.

It is our hope that in realizing her film the author and filmmaker will be able to maintain the balance between closeness and distance which is intrinsic to the treatment.”

Born in Mill Valley, California, she grew up in Walchensee, Bavaria. While studying at the HFF Munich, she realized several short films and directed a number of music videos. Her documentaries Bling Bling, about the gangster rap scene in L.A., and Kinder der Schlafviertel (Street Punk Moscow), about punks in the suburbs of Moscow, screened at international festivals and won a number of prizes.

For more information and photos of the award ceremony, please contact: 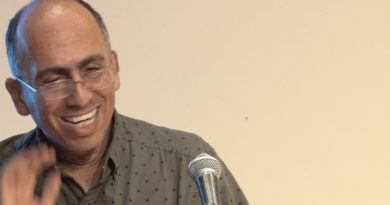