“I consider the comparison between the Nazi atrocities and the Israeli crimes, despite the many differences, not only historically justified, but mainly politically necessary. As this is one of the important tools to prevent Israel from misusing the Nazi Judeocide as a free license to kill,

to abuse, to dispossess and to expel the Palestinians. This is one of the
means to show that Israel has no moral right and actually never had to
induce guilt feelings for example in Europe. Guilt feelings among non-Jews,
that are the result of the long history of persecutions suffered by the
Jews and that Israel and its affiliates know perfectly how to play upon and
manipulate them.” Shraga Elam, 4 August 2004

Life moves on, grinding, sometimes nice and sometimes painful. We saw
Israeli regime’s aggression on Syria which went unanswered for years and
“Israel” continues to illegally occupy the Syrian Golan. That was
unanswered until Saturday morning when Syrian air defenses shot down an
Israeli F-16 jet (paid for by US taxpayers) and crippled an F-15. This is
shocking the establishment in the apartheid state and changing the rules of
engagement. It is also a message to the US which used its F-16s to bomb
Syrians fighting the US backed terrorist group called ISIS. This comes on
the heels of imminent final defeat of terrorist groups funded by the US
(both in Iraq and Syria) which left only the US funded Kurds which are now
fighting Turkish forces who are, like the US forces, are illegally inside
Syria.

There is still the genocidal war on Yemen by Israel/US puppet regimes in
the UAE in Riyad (who also arrested a Saudi women for criticizing
normalization between the Kingdom and “Israel”). The US backed Egyptian
dictator Sisi eliminated opposition and the Egyptian people are growing
poorer every day while helping still suffocate Gaza to please the
US/Israel. These and other dangerous geopolitics could spark wider
instability and conflict across Western Asia (AKA “Middle East”).

Here in Palestine, the Indian prime minister visited Ramallah and said a
few nice words to Abbas. By contrast when he visited Israeli leaders, he
said much nicer word and most importantly did business deals that
propped-up the Israeli apartheid regime. In parallel, Israel intensified
its genocidal attacks on the Palestinian people. Most Palestinians
recognized another hero martyr killed by the colonizers and accused the
Palestinian Authority of continuing to help the occupiers. Gaza is
unlivable but even Jerusalem neighborhoods like Al-Eisawiya are besieged.
And dozens of our friends languish in Israeli “jails”. They treat anyone
who resists colonization (most of them non-violent) as criminals and even
worse than criminals (because criminals at least get legal rights).

SaturdayI gave a talk to a delegation of 23 internationals who participated
in planting trees. I explained my optimism based on many factors: failure
of monolithic states before, strength in diversity, weakening US and
Israeli positions, war becoming obsolete, growing resistance etc. I
admonished them to work for justice which is a way to peace. The first
thing is “speaking truth to power”. Then comes a) resistance in all its
forms (including BDS and other acts of civil/popular resistance), b)
building new models of life and coexistence (sharing, equality, justice,
sustainability). Which brings us back to thinking globally and acting
locally. We have 8 international volunteers and several local ones working
at the Palestine Institute for Biodiversity and Sustainability (
palestinenature.org) and yesterday we were out in the field and then in the
garden working away.

South Africa slams Israel at the UN as an apartheid state

Radiance of Resistance: A film about the Tamimis and Nebi Saleh. Trailer
here:

I Helped Sell the False Choice of War Once. It’s Happening Again.

A bedouin in cyberspace, a villager at home
Professor,  Founder, and (volunteer) Director 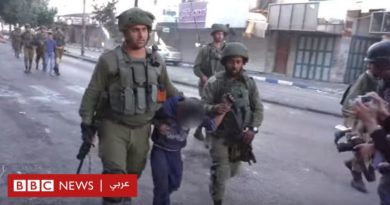