Last email, I forgot to include below it the vision I presented at the
Edinburgh International Festival. Our tour of the UK is getting better and
better as momentum builds more people show up. We also get to meet very
interesting people. For example, the wife of Journalist Michael Adams
attended my talk and then spoke to me after words movingly about her
deceased husband. Adams (1920-2005) was a great journalist who covered WWII
and was imprisoned in war. He went on to cover Middle Eastern affairs and
for his objective reporting (like many) he was attacked by the Zionist
network of hooligans. He wrote a book called “Publish it Not: The Middle
East Cover-up” (1975)* about the tactics used to suppress the truth, shape
public opinion. I mentioned to her the similar works by Paul Findley on
Zionist relentleass efforts to suppress the truth (books like “They Dare to
Speak Out” and “By way of deception”). Unfortunately our friend Findley who
I first met in the early 1980s died this week. He lived a very meaningful
life. Also we lost another decent human being this week: our friend Kamal
Boulata, Jerusalemite artist and co-founder of Nonviolence International.

We also commemorated the anniversaries of dropping nuclear bombs on
Hiroshima and Nagazaki. Six years ago I spoke at those two cities on these
anniversaries (the first Palestinian to do so. See below for my speech at
Hiroshima **)

In this rather short informal presentation, I was asked to give a manifesto
for the future. Thinking about it, I propose that briefly I address the
issue of existential need to maintain biological diversity including human
diversity. Tthis resonates deeply with me due partly to my background in
biology and medical genetics: the former helped understand better the
evolution of diversity in nature and the latter (together with my social
and polical interests) the nature and importance of human diversity.

In many ways I think we can approach phenomena like racism, environmental
destruction, colonization and wars via a diagnostic-therapeutic approach.
As a student of science I was always keen in following this pragmatic
approach with proposing rational testable hypothesis, collecting data,
testing and retesting ideas with as little bias as is reasonably possible.
With regards to the situation in Western Asia (aka “Middle East”), I wrote
a book called Sharing the Land of Canaan, which talks about patient
history, symptoms and underlying cause (etiology) as well as prognostics.
I addressed in more detail the therapy in a book called “Popular Resistance
in Palestine, History of Hope and Empowerment”. Here I do not want to go
over these details and I want to just focus on one issue which is human
diversity as a an imeprative – strengthening diversity as the most rational
and obvious outcome even following colonial anti-colonial struggle.

I was professor at Yale University Medical School and when I was teaching
my students I would say, you have to take a bit of patient history,
understand what’s going on, and then you make the right diagnosis, and then
you offer therapy and you look to prognosis. Taking the same approach is
the logical way of looking at things, not emotional gut feeling kind of
thing. Our subject or patient is a geographic region that is very
significant, it’s at the nexus of continents and the cradle pf
civilizations. Due to geologic and geographic location, we have rich
biodiversity including human diversity. A bottleneck for bird migration
where >500 million birds pass on annual migrations from Eurasia to Africa.
It was also a bottleneck for human migration where early humans spread out
of Africa to the rest of the world.

This is the first area on planet earth that humans went from
hunter-gatherers to agricultural and pastoral lifestyles. It is where we
first domesticated plants like wheat, barley, and lentils and animals like
goats and sheep. This is thus the fertile crescent. Jericho for example is
the oldest continuously inhabited town on Earth; It has always had people.
Of course these people acquired different religions, as religions come and
go but the native/indigenous people stayed here for 12,000 years since that
dawn of agriculture and animal husbandry. It is what we call dawn of
civilization because when people went from hunter-gatherers to agricultural
communities their numbers went up so they lived in villages and towns and
started to organize their lives and started to be more creative creative
with the Iron and Bronze age. These people, our ancestors the Canaanites,
are depicted in hieroglyphics and in Mesopotamian reliefs as rich people
who had a fertile productive county (the land of milk and honey mentioned
in the Bible).

Our Canaanitic ancestors evolved into various tribes: Nebateans (early
Arab), Jebuisites, Hebrews, Ammonites, Phoenecians and Phyllistines among
others. Towns and villages that they inhabited prospered and as they
diversified and specialized they traded their goods. Cheese asnd butter of
Nebateans for perfumes from Jericho and wood from cedars of Lebanon. For
these 12,000 years we have had very little conflict here. Palestine having
multiethahnic, multireligious, multicultural and even multilingual society
for thousands of years. This may surprise some of you because you watch
western media which is basically propaganda nonsense. This country is one
of the least conflicted on Earth. We are just unlucky to be living in this
era now. If you go back before this conflict between natives and Zionism
you would go to the Crusaders, 1190 AD, another conflict that came from
outside. So we’re talking about hundreds of years with no conflict in
between short episodes imposed on us from outside.

So this is not a congenital problem, the patient is not hopeless, the
patient has had episodes, once in a while, but these native people
prospered developing religion, laws, music, and even the alphabet. The
latin alphabet was invented and evolved by our Canaanite ancestors. The
Aramaic language that Jesus spoke had significant influence as it evolved
to Arabic, Assyrian, and Hebrew. Like languages, religious beliefs also
evolved and diversified. Our country has always been multi-ethnic,
multicultural, multi-religious, and multilingual. Very rare episodes which
came from outside attempted and failed (e.g. Crusaderism, Zionism) to
change this. Settler colonialism is not uncommon diagnosis and it is a very
destructive force for both the native humans and all other native fauna and
flora. We can cite for example destruction of millions of endogenous trees
and planting European pine trees to hide the places of the destroyed
Palestinian villages. We can cite draining the Hula wetlands, diversion of
the Jordan valley waters (leading to desertification) and the politically
motivated Red Sea-Dead Sea Canal.

I’m optimistic because our subject, the Western part of the Fertile
Crescent has been healthy and prosperous and strong (via diversity). Its
current setback started with an idea called Zionism. Zionism is not a
complicated idea, it says that European Jews are discriminated against in
Europe, they should have their own state, so come and take this country
that is called Palestine and make it the Jewish state of Israel. Most
blacks in North America resisted discrimination but there was a minority
who decided to go make their own state created a nation state in western
Africa, Liberia, and the problem for them is the same problem that these
European Jews faced, and Herzl also one of the founders of this movement
faced, is that Liberia was not a land without a people for a people without
a land. There were people there, natives, and what to do with the natives
is always a problem for people who come from abroad to try and create new
realities on the ground. Today 7.5 million of us Palestinians are refugees
or displaced people (of a total 13 million Palestinians). Settler
colonialism has one of three possible outcomes: 1) Algerian model where 2-3
million Algerians were killed in the struggle and then one million French
packed their bags and went to Europe, 2) Australia and the US model
(genocide of natives), 3) The rest of the world model were descendants of
the colonizers and descendants of the colonized live in one country and
share it. There is no fourth scenario in the history of colonization.

The diagnosis and the prognosis (third scenario) is logical and attempts by
colonizers are monolithic society fail (cf Crusaderism, Zionism). They
fail because diversity is strength. In biology when I look at the forest
and I see one species dominate I don’t say this is a healthy forest. I say
this is unhealthy, it’s going to decline. The strength comes from
diversity, so we say that’s what will happen here and that’s another reason
why I’m optimistic – we fight for equality and to maintain the country the
way it was supposed to be: multi-ethnic multi-cultural and multi-religious.

Therapy in the form of popular resistance and a global joint struggle as we
did against apartheid in South Africa is working. We just need to intensify
it.

Stay Human qumsiyeh.org A bedouin in cyberspace, a villager at home

Your sisters stayed in their palaces

With golden chains and shameless lies

Some grinned and aided criminals…

Others chose to veil their eyes

Some justify rape and expulsions

Others prayed to their silent gods.

When you thought they had their fills

In that dry June of decays,

They climbed over the hills

To finish the ghastly deeds

Dark masses on your strong arms

Fractures on your white breasts

That gave milk to hungry babies

Bruises on your gentle fingers

That wiped the tears from so many eyes

Your sad eyes bear their marks

on a kind face that gave millions hopes

Of motions, plans, and resolutions

that sacrificed justice and truths

at the altar of greedy egos

Where goes the hope of children dreams?

In olive trees or returning cactuses?

In time, distance, or struggles?

While she struggles to break the doors

And tear down the suffocating walls

and weaklings imagine strength in lies

But in the end no one denies

To help heal all bruises

When the sun again shines

Of ancient and newly rejuvenated Palestine 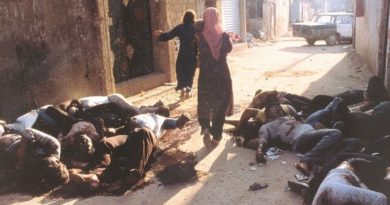 Survivor Nidal Hamad: “It is not permissible to forget…Sabra and Shatila” 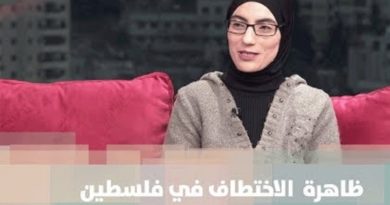 A message to all whom it may concern – From Psychologist : Thawra Enjass