Urge Superstar Footballer Raheem Sterling Not to Sign With Puma

Palestinian Campaign for the Academic and Cultural Boycott of Israel (PACBI)

We can’t allow Puma to use Raheem Sterling's anti-racist stance.

Puma supports illegal Israeli settlements forcing Palestinian families from their homes, making them even more vulnerable during a pandemic.

Sterling is known for speaking out against racism. He has advocated using economic pressure to bring about change. He has called for more people to speak out.

Take action now to thank Raheem Sterling for his stand against racism and urge him not to accept Puma’s dirty money. Let Raheem Sterling know that Puma supports Israel's apartheid against Palestinians that South Africans say is worse than what they endured.

Complete the form on the right to send an email to Raheem Sterling urging him not to sign with Puma as long as Puma supports racism.

Puma has been under increasing pressure to end its support for Israel’s military occupation and racist apartheid policies.

Puma is the main sponsor of the Israel Football Association, which includes clubs in illegal Israeli settlements. Puma’s exclusive licensee in Israel is listed in the UN database of companies active in illegal settlements.

Sports teams have dropped Puma sponsorship and pledged not to join the #PumaFam until Puma ends its complicity in Israel’s violations of Palestinian rights.

News of Puma’s 100 million euro offer to Sterling has reportedly caused tension within the company, which has recently furloughed staff members due to cutbacks during the pandemic. 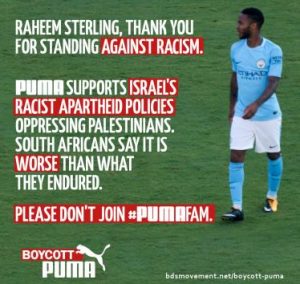