52 events for industry professionals on the development, financing and distribution of film projects and interactive works

A record-setting 82,000 euros in prize money will be awarded during this year’s edition of DOK Leipzig. In addition, the festival features non-cash prizes valued at an additional 11,000 euros, which filmmakers can for instance use for the development of their film projects. This year marks another positive development in regards to prize sponsorship: for the first time, all of the Golden Doves in the long film competitions are endowed by prize sponsors. DOK Leipzig is also delighted to welcome a new sponsor this year in the Weltkino film distribution company, which has chosen to endow the Golden Dove in the German Competition in 2019. Furthermore, public broadcaster MDR is once again sponsoring the Golden Dove in the International Competition, and the Medienstiftung der Sparkasse Leipzig is contributing the prize money for the Next Masters Competition, as in previous years.

Three new awards are being presented this year at DOK Industry, DOK Leipzig’s platform for film professionals. New this year are the Development Prize for the Best Female Documentary Film Project for a Female Director, granted by the Saxon State Ministry for Higher Education, Research and the Arts, the D-Facto Motion Works-In-Progress Prize and the EWA Women’s Talent Development Award. All of the five prizes at DOK Industry may be used for the development of existing film projects and for extending artists’ connections within the film business.

DOK Leipzig is celebrating an anniversary together with EU-OSHA, the European Agency for Safety and Health at Work. For ten years now, DOK Leipzig has been presenting the Healthy Workplaces Film Award, which honours an exceptional production that treats the topic of work. The award is intended to facilitate the subtitling of the winning film in several European languages and is accompanied by prize money of 5,000 euros.

A total of 24 awards will be presented at DOK Leipzig this year.

“I would like to particularly thank all of the festival’s prize sponsors, partners and supporters. Without their wonderful support, it would not be possible to bring over 300 films and nearly 2000 international industry professionals to Leipzig or to give our Leipzig audience such an unforgettable cinema experience every year,” acknowledged festival director Leena Pasanen. “I hope that this terrific commitment to the festival will remain strong for many years to come.”

Once again this year DOK Leipzig has received extraordinary support from many sides. The primary Main Supporter this year is once again the City of Leipzig, the largest financial backer of the festival and the proprietor of the Leipziger Dok-Filmwochen GmbH. The State of Saxony also contributes substantial funding to DOK Leipzig. In addition to the central festival funding, the Saxon State Ministry for Higher Education, Research and the Arts contributes project financing for inclusionary offers. These measures are funded by tax revenue on the basis of the budget passed by the representatives of Saxony’s state parliament. This year’s further Main Supporters are the EU programme Creative Europe Media, the Mitteldeutsche Medienförderung and the German Federal Government Commissioner for Culture and Media – all of which provide crucial support for the festival and its industry programmes.

Additionly, the Federal Foreign Office is assisting the festival once again as a supporter, and public broadcaster ZDF continues to provide generous backing, as has been the case for many years. The Federal Agency for Civic Education is making a substantial contribution to debate culture at the festival by supporting the Symposium “Who Owns the Truth? Aiming the Camera at the Political Opponent”.

The SLM (Saxon State Authority for Private Broadcasting and New Media) is on board once again as a Cooperation Partner and is supporting the festival’s programmes for up-and-coming filmmakers. These include the Next Masters Competition and the master classes, as well as DOK Spotters, school screenings and DOK Neuland.

Alongside EU-OSHA , this year’s DOK Premium Partners once again include PŸUR. This year and next, the Leipzig-based telecommunications provider will be equipping all of DOK Leipzig’s event locations with powerful WiFi that accredited festival guests can access free of charge.

Renewed commitments on the part of ECE Promenaden Hauptbahnhof and IQ

Steuerberatungsgesellschaft have made it possible to present daily film screenings free of charge in the east hall of the main train station during the festival week. The screenings held at the Polish Institute are also free thanks to the festival’s long-time co-operation with the institute. ARTE is providing support for the fifth time for the interactive exhibition DOK Neuland, which is taking place this year for the first time at Leipzig’s Museum der bildenden Künste. The DOK Neuland Award is endowed for the second time with prize money granted by DREFABRIK. Finally, BIG Cinema and Technischer FilmDienst have played a key role in the successful digitalisation process realised over the past years.

A host of further partners support DOK Leipzig with monetary contributions and donations in kind and contribute significantly to the success of the festival. The info box located at Marktplatz is made possible with the support of modulbox mo systeme. DOK Leipzig’s loyal long-term partners include companies like Computer Leipzig, Xchange Technology Rentals and Cinestar. Ver.di FilmUnion has also been at DOK Leipzig’s side as a partner for many years.

DOK Leipzig is also grateful for the wide range of co-operation partners that have contributed thematically to the festival programme.

Media partners for DOK Leipzig 2019 are Mitteldeutscher Rundfunk, detektor.fm, taz and, for the first time, Cineuropa.

From 28 October to 3 November this year, DOK Leipzig is showing 310 films and interactive works from all around the world. The festival will open on 28 October with the world premiere of THE FORUM, a film by Marcus Vetter. The Festival Centre is located in Leipzig’s Museum der bildenden Künste.
You can find an overview of all supporters, partners and sponsors here.
Here is a full list of all awards and award sponsors for 2019.

You can find logos, impressions of the festival and additional images here.

For any questions regarding the press release, please feel free to contact: 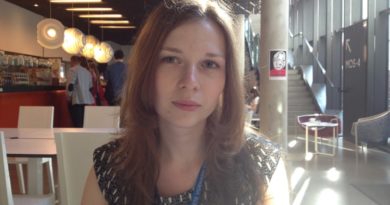 Coming this evening interview with the Russian Anastasia Novikova