On the eve of the 67th year anniversary of the Nakba (the catastrophic
ethnic cleansing of Palestine), Benjamin Netanyahu finally formed a
“coalition government” a group of ministers who are honest about their
racist and genocidal tendencies (see article by Gideon Levy below). It
includes a “Justice” who called for murdering Palestinian mothers so that
they do not bring out more “snakes”. It includes the head of “civil
administration” who openly supports ethnic cleansing and genocide. A
government more right wing in its composition than Germany was in 1933-1939
or South Africa in the 1970s and 1980s but an honest one indeed without
double talk or hypocrisy. What is disappointing is not the make-up of the
government but the hypocritical response to it. Words from the “Palestinian
Authority” wining about the new government were accompanied by continuing
security coordination with Israel and the PA arrest of dozens of
Palestinians simply for having different political affiliation (e.g.
students who against all odds were voted to student councils at Palestinian
Universities). Geopolitically, there are now two choices: US/Israel that
attempt to dominate the Arab World and Western Asia through a class of
puppet dictators (Saudi Arabia, Qatar, UAE, Egypt) and the axis of Russia,
China, Iran, Yemen, Syria, Lebanon (led by Hizbollah) and large segments of
Iraqi society. It would be nice to have a third axis (like the non-aligned
movement led by Egypt and India in the 1960s) but it does not currently
seem possible.

Yasser Arafat managed to steer the PLO leadership to semi-neutrality or at
least flexibility in building alliances as need arose. But even acting as a
good honest broker to solve some regional disputes many times by asking
people to put the interests of their people ahead of their superpower
sponsors (then it was Soviet Union and the USA/NATO). In the time of Abu
Mazen, we see more a definitive side-taking (e.g. with Saudi Arabia against
Yemen) in a fashion that actually weakened the Palestinian cause
dramatically. The black and white attitude was applied in a way that is
like George Bush “you are either with us (USA right wing government) or
with the terrorists. In this case you are either with us (Fatah) or with
the terrorist Hamas.  There seems no room left for nuances or indeed for
diplomacy. From the agreement with Hamas, there is only the part about
holding elections for the PA that Abbas wants to implement. Other parts of
the agreement (holding elections for the PLO, economic issues etc) were
supposed to happen synchronously but they are now off the table. Meanwhile
Gaza was devastated and is still under siege (civil society is responding
and a flotilla of ships is moving to break the siege). Last time this
happened, there were martyrs and some high level PA officials ridiculed the
Free Gaza movement. Instead, it would have been nice to see PA officials
join Haneen Zoabi and Raed Salah on the boats. Alas wishful thinking for
change.

The old definition of madness still apply: repeating the same (failed)
tasks and expecting different results. And we live in a mad, very mad
world. US/Israel still fund terrorists, support dictators, and support
ethnic cleansing. Those who bet on them to help them achieve “independence”
still do not understand and still hope somehow magically, things will
change. They would be wise to listen to Russian President Putin. He was
speaking at the 70th anniversary of the win over Nazi Germany (26 million
Russian lives were lost) and was flanked by other world leaders including
China (though noticeably absent where key NATO leaders). He said, the
attempt at creating a unipolar world is failing and that we should look
towards a new system. Iran, China, most of Latin America and other
countries which long suffered from Western Colonialism agreed. President
Abbas was there but had no comment. I was reminded of Naji Al-Ali 1964. I
was reminded of Orwell 1984. I was reminded of the book Majanin Beit Lahmem
(the crazy people of Bethlehem) published 2014.

Life goes on in occupied Palestine. A Palestinian community (Susya) is
about to be uprooted. Colonial settlers and soldiers still attack native
Palestinians with impunity. Corruption and heroism happen, poverty and
greed happen, cooperation and collaboration happen, resistance and
normalization happen. Poor people struggle and rich get richer. It is hard
to cope sometimes but we keep going against all odds.

Note: 24 people registered but we still have six places available for
Saturday’s workshop (see below).

What do Israelis know about the Nakba?

Stop whining. Long live Israel’s new and honest government. Israel’s new
government won’t spout hollow slogans about peace, human rights, and
justice. The truth will be thrust in the faces of Israelis – and the world.
http://www.haaretz.com/opinion/1.655674

If you have not registered, there are six places left:

When: 9 AM – 4 PM Saturday 16 May 2015 (lunch included)
Where: Gardens of PMNH, Mar Andrea, directions here
http://www.palestinenature.org/visit/

How: To register, send your name, your email, your phone number, and a brief
background about you (two sentences but no more than 50 words) to
info@palestinenature.org before Midnight Wednesday May 13 but register
early as spaces are limited).

Why: The workshop explores the power of nature to cure body and soul and
maintain our health and encourage us in difficult circumstances. In the
beautiful setting of the developing ecosystem at Mar Andrea campus of
Bethlehem University. The Palestine Museum of Natural History and Palestine
Institute of Biodiversity and. Sustainability with cosponsors Al-Rowwad
Center, Institute of Community Partnership at Bethlehem University, and
Palestine Center For Rapprochement Between People (list in formation)
invite you to enjoy a beautiful day in the garden and helping us build a
peace garden that will attract people throughout Palestine to learn about
the healing power of nature. Facilitated by Dr. Ani Kalayjian is a
psychology professor (American Board Certified Expert in Traumatic Stress,
logotherapeutic psychotherapist, traumatologist, Genocide Scholar, conflict
resolution expert, researcher, community organizer, and international
consultant).

More here: com and in the attached (in Arabic and English).  We will also
have locals helping connect us to nature (animal and plant life including
folklore and medicines.) in Palestine: Prof. Mazin Qumsiyeh and Dr. Omar
DarIssa (others may join).

and come visit us any time. We also welcome volunteers: palestinenature.org 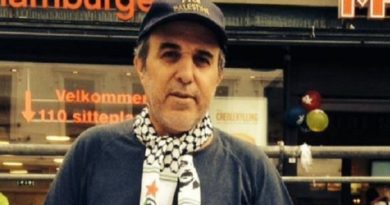 Terrorism has no moderation, as France and the US claim