It is very unfortunate that the Zionist government managed deceive and manipulate you together with the president of the United States and some presidents of European countries through their delusional story about the kidnapping of one of its soldiers to justify the violation of the so-called humanitarian truce and to brutally attack and bomb with its destructive machine over the heads of civilians in Rafah and tearing their bodies and turning them to shreds.

It is also regrettable that your role turned from being the General Secretary of the United Nations to a spoke person for Israel with your biased positions by the condemnation of the Palestinians and demanding the release of the kidnapped soldier based on false Zionist claims.

During 25 days of the brutal Zionist aggression on the Palestinian people in Gaza and the West Bank committing terrible crimes and massacres. You have not moved a finger and you stay silent, as if the blood of innocent civilians and the remains of women and children, the elderly and the bombing of UNRWA schools and tens of thousands displaced people by the Zionist machine war, and the destruction of refugee camps that UNRWA is responsible for its management and that according to international law must protect.

All that happened at the sight of the peoples of the world who moved in solidarity with the Palestinian people and you justify the barbaric Israeli aggression considering it as self-defense.

You didn’t dare to condemn the barbaric aggression of the Zionist, instead rushed to believe the Zionist lie and their phantom story to be seen later that the soldier was killed in the field and is believed he was shot and killed by the Israeli army itself.

As General Secretary of the United Nations your positions must be balanced and to confirm the accuracy and truth before any statement or declaration of a position and you should not ignore the crimes committed against civilians and the flagrant violation by Israel of all international laws and human rights charters.

You are expected to work for delivering justice, security and peace for all the peoples of the world. With our strong condemnation for your positions and your statements that are aligned to the Zionist occupation and its crimes against humanity, we affirm the full right of Palestinians to live and exercise their rights and their freedom and their legitimate struggles as any other people, and this requires you to work vigorously to completely end the siege on Gaza and the opening of all crossings without any exceptions or restrictions, and the emphasis on the right of fishers and their freedom in the search for the source of their income, and rebuild the Gaza International Airport and the construction of the Gaza seaport in order to achieve the conditions of dignified human life.

We ask you to work on the application of UN Security Council resolutions demanding an end to the Israeli occupation and the imposition of sanctions on the Zionist entity as it continue to commit war crimes in occupied Palestine . 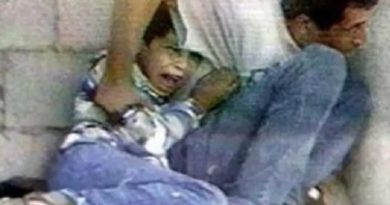