As Palestinians and Arabs living and organizing in the U.S., we join the voices of our people in besieged Gaza and all across Palestine and the Arab World in fully rejecting this sham peace process created by the apartheid, settler-colonial state of Israel and its U.S. imperialist patron – and by declaring it “dead on arrival”!

Details of the plan suggest that Trump is creating another roadmap for Israel to expand its illegal occupation and annexation of Palestinian land – a continuation of three years of anti-Palestinian policy that includes declaring unilaterally that Jerusalem is the capital of Israel, cutting U.S. funding for UNRWA (United Nations Relief and Works Agency, which provides support and services for Palestinian refugees), claiming Israeli sovereignty over the Golan Heights, and shutting down the only U.S. Consulate (in Jerusalem) that serves Palestinians.

The plan will allow Israel to annex all of Jerusalem, as well as 30-40 percent of Area C, which makes up 60 percent of the West Bank and is already under full Israeli military and administrative control from the days of the Oslo Accords. This territory includes the Jordan Valley, giving the Israelis permanent control of Palestine’s eastern border.

Israel will also be given the green light to annex all but 15 of the 121 settlements in the West Bank. These settlements have been built exclusively for Israelis over many decades on already-stolen Palestinian land; and even though the U.S. does not acknowledge it under Trump, are illegal under international law.

In addition, Israel will maintain uncontested military control over all the territory of historic Palestine, and the Palestinian Authority would have to disarm resistance organizations and demilitarize the Gaza Strip.

The plan asks for no concessions from Israel except for a temporary halt of new settlements.

This “deal” is an attempt at a panacea for many. It will be announced while Trump faces impeachment in Congress, while Netanyahu faces corruption charges of his own in Israel, and while the unipolar world defined by U.S. dominance is diminishing by the day – partially because of the economic strength and sustainability of socialist China, but mostly because of the U.S.’ consistent political and military failures in the Middle East and the world, costing taxpayers like us trillions of dollars.

This “deal” is also a favorite of Saudi Arabia and other Gulf countries, which want to thwart the recent advances of the Axis of Resistance (Iran, Yemen, Hezbollah, and Syria) by supporting this expansionist U.S. / zionist project.

USPCN wants to remind all of the failed Oslo Accords, which some in our national liberation movement at the time thought would lead to real peace. But it – and every “peace agreement” that followed – only led to Palestinian concessions and Israeli expansion, because it did not address our thawabet, the “constants”: our rights to Return, to self-determination, to resist occupation and colonization, and to liberation in an independent state on all of historic Palestine, with Jerusalem as its capital.

Our people ultimately rejected Oslo, and have already rejected Trump’s ridiculous “deal of the century.” It makes no difference what Trump, Kushner, Netanyahu, Gantz, or Palestinian Authority President Abu Mazen (who continues his “security coordination” with the Israelis) say or do, because the Palestinian people will continue to resist, by any and all means necessary, U.S. / zionist plans for the liquidation of our rights. And the international community will continue to organize BDS campaigns across the world and isolate Israel as the criminal, apartheid state that it is.

Peace and justice for Palestinians and everyone else who lives in the Arab World and Middle East cannot be achieved without defeating zionism and upholding the full rights of the Palestinian people. We call on all forces of progress to reject Trump and his reactionary policies in the U.S., in Palestine, and across the world. 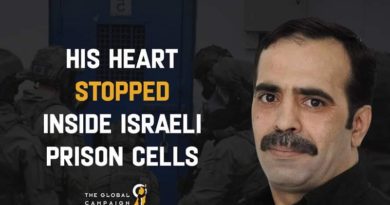